Actually, I wanted to write about beauty pageants for little girls, because it’s my favorite topic in the (total freak show) “Explosiv” on RTL. But as I heard that some other people of the course also like watching (and troubling over) these pageants I decided to write about something different. A few weeks ago I watched a movie that deals with a similar topic. It’s not about pageants, but also about a mother, who objectifies her daughter and wants to have success at the cost of her.

The movie is called “My Little Princess” or “I’m not a Fucking Princess” and is based on a real story from the 70’s , namely the childhood of the director Eva Ionesco, who was photographed by her mother in highly sexualized poses or even naked when she was a child. (Here is the German website of the movie. Sorry, I somehow couldn’t find an English trailer)

The motivation of Irina Ionesco, Eva’s mother, in photographing her daughter was seen in art. In the 70’s she was celebrated in the world of art for being a pioneer in this domain. But actually, she used the childish preference for dressing up of her daughter and made money out of this “fun”.  Even when the family is characterized as poor in that film and one could argue that she did it for the money; I don’t think that she did it for financial or artistic reasons, she did it for herself. In the movie you can see in some scenes that Hanna (the mother) is looking very carefully at her own mirror image, as she wishes her own beauty to come back again. But as her beauty won’t come back again, she needs another way to be successful. She realizes that her daughter has the same beauty that she once had and that she could use that. Here you can see a parallel to the “very ambitious” pageant-moms, who “do it for their kids” and whose daughters “have fun” with it, but who actually want to compensate something in their own lives. In the film, Violetta (the daughter) repeats saying that she doesn’t want to be photographed again, but her mother doesn’t want to hear that, because, in the meantime, she has become a successful artist by publishing her daughter’s photos.

Here are some of the photos, but they are also available on google (what shocked me). I hope that nobody calls the police to arrest me because of distribution of child pornography! I just wanted to show you how extreme these photos are and that they are still in circulation) 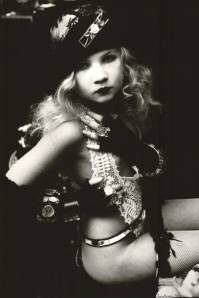 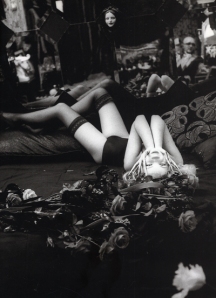 Making an adult out of Violetta by putting on makeup on her and dress her in sexy clothes, she steals her daughter’s childhood. Violetta is also instructed to wear sexy clothes at school to show her “glamorous side”. Because she wears these clothes and because her schoolmates know about the photos and tease her, Violetta is more and more separated from her own childhood. I think that here is another parallel to child pageants, because the little girls are dragged from pageant to pageant and spend their free time on being at the hairdressers or getting tanned, so that there isn’t very much time left for living an ordinary child-life and playing with other kids. By fulfilling their own dreams, parents like these steal their children’s childhood.

In my opinion, parents who take advantage of their children in such a way have often problems from their own childhood or in their self-esteem. The problem is that by exploiting their children to such an extent to feel better, they damage something in the identity of their child. It’s like in a vicious circle.

Another thing I was thinking of, when I watched the movie, was how people show pictures or videos of their children on websites like Facebook. Can you compare that to the movie?

I don’t know, if there are photos like these of Eva Ionesco on Facebook, but somehow parents who publish photos of their children do the same as Irina Ionesco to their children (even when it’s not to that extent), because they don’t protect their privacy. I think it’s a difficult question…(but perhaps some other person of the course wants to answer it;-)

This entry was posted on Tuesday, January 10th, 2012 at 3:53 pm and is filed under Uncategorized. You can follow any responses to this entry through the RSS 2.0 feed. You can leave a response, or trackback from your own site.